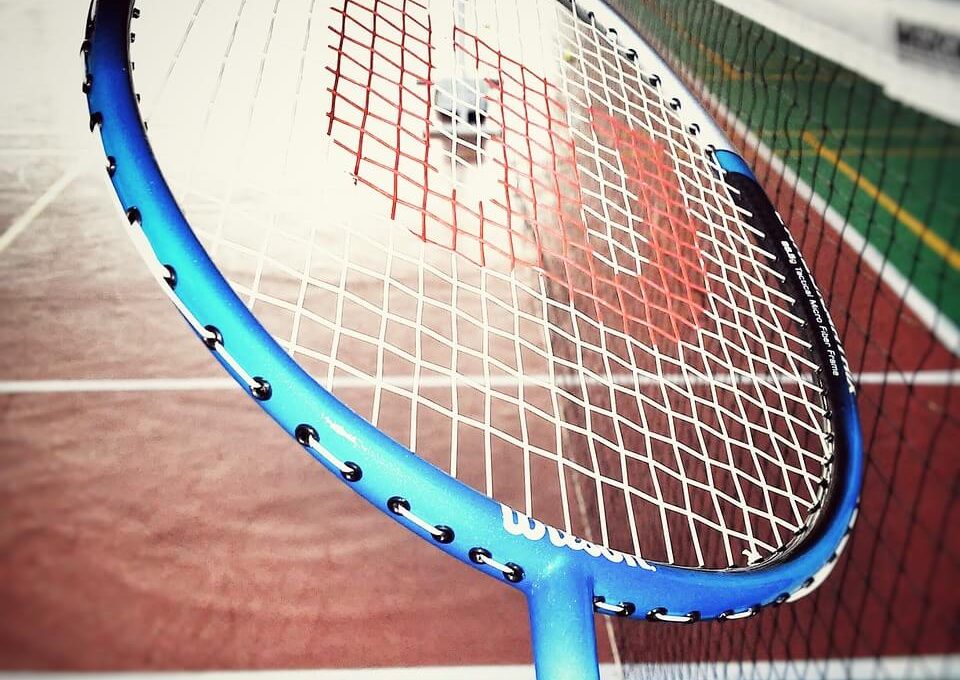 The discussion on the better game between badminton and tennis is certainly an intriguing one. Arguing that one is more fun than the other sounds low as all sports games should be fun.

However, with a closer look, there are several differences between these two games. Noting the more demanding game between tennis and badminton could be quite daunting. Nevertheless, the differences can be elicited with a better understanding.

That said, it is better to initially look at the two games individually.

From TV visuals or own personal experience, tennis is a basic racket game that can be played in different forms. It can be played exclusively against one challenger, better known as singles, or amongst two teams with two players, otherwise known as doubles. Players use rackets strung with a cord and used to hit a hollow rubber ball. Winning the game involves playing the ball in a way that the opponent cannot play a valid return.

Tennis is included as one of the Olympic Games that can be played on all the levels of the society and by all ages. So to say, it can be played by anyone who can hold the racket well, including those in wheelchairs. Its origin has been pointed to Birmingham in England where it was referred to as lawn tennis. Since its inception, minor rules have been changed. This includes the inclusion of a hawk-eye system through the adoption of electronic review technology.

Many people attribute their love for tennis to the simplicity of equipment used. For beginners, a racket and balls are all they need. 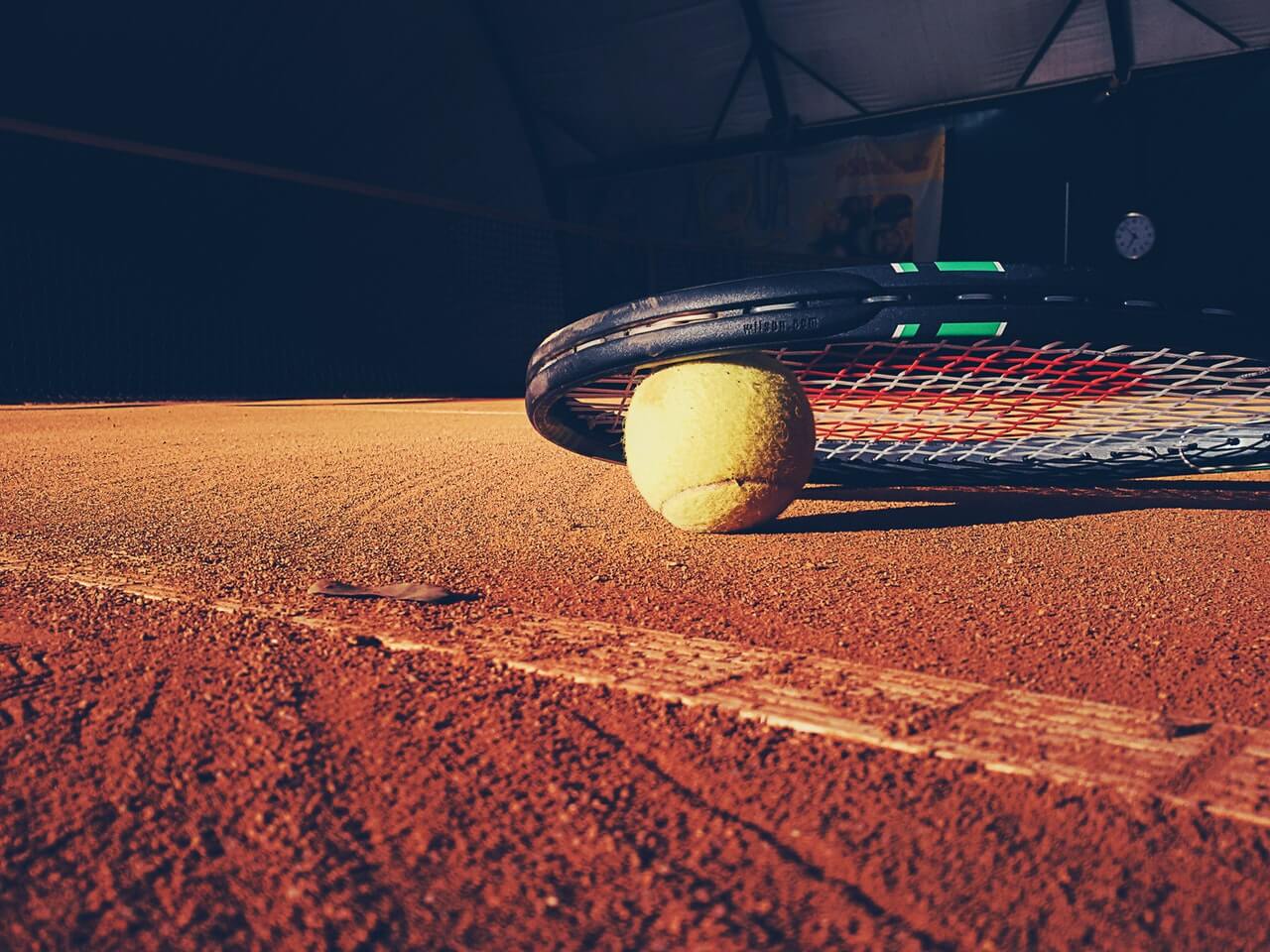 It consists of a handle (grip) that is linked to a neck joining a mount that holds a matrix of firmly pulled strings. There are several modern specifications of a tennis racket. Just to mention, the rules indicate that the hitting area should have strings that are flat and uniform.

The frame guarding the hitting area should not exceed 29 inches length and 12.5 inches width and must be of a fixed size, shape, weight and without any energy source. Without forgetting, the rackets should also not provide any form of communication or instruction to the player.

Original tennis balls were made from cloth strips stitched together using a thread stuffed with feathers. However, modern balls are made from vulcanized rubber covered with a felt coating.

White was the predominant color which gradually changed to optic yellow to enhance visibility. These balls conform to specific size criteria, weight, bounce, and deformation. 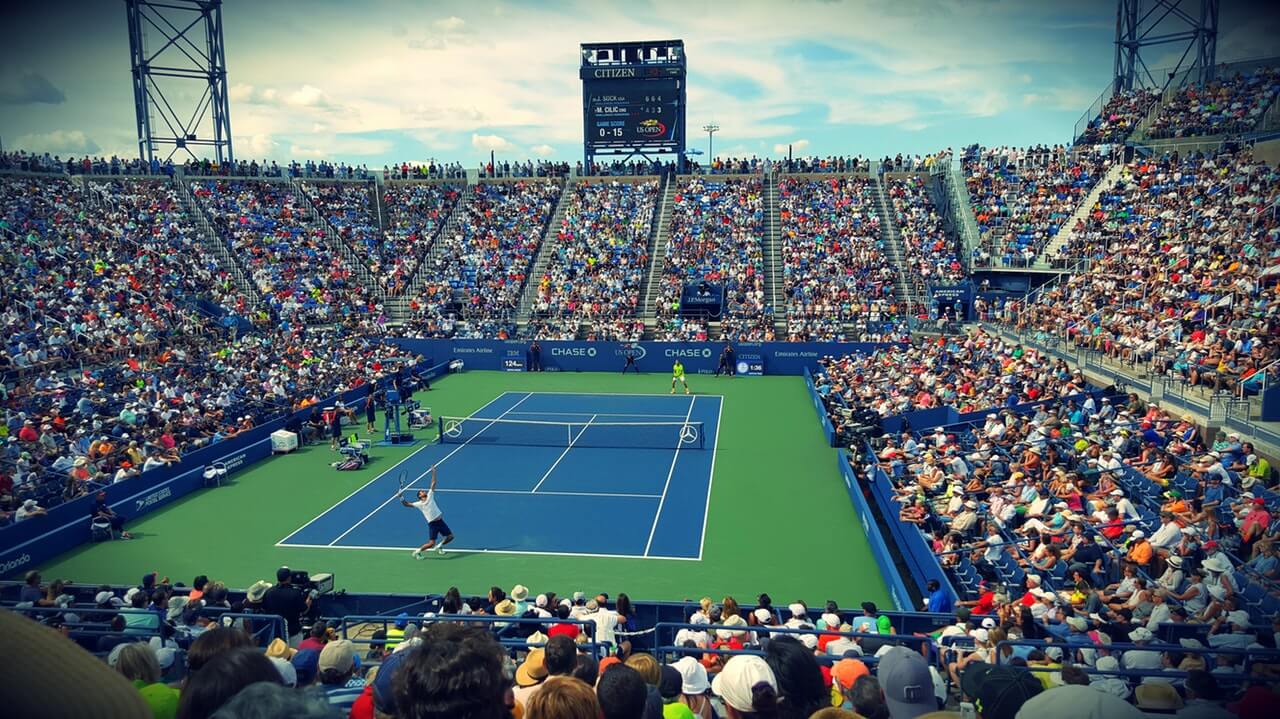 Tennis court. Tennis, like any other field game, is played on a rectangular, flat surface. Specifications of the court include being 78 feet long, 27 feet wide for singles and 36 feet for doubles.

The court also has an additional clearance space for players to reach overturn balls. A net, 1.07 m high at the posts and 0.91 m high at the center, is stretched covering the whole width of the pitch dividing the field to two equal ends.

Player of a Single Point

Players of tennis start the game on opposite sides. One player, designated to serve, serves the ball to the opposite side of the receiver. Selecting the server or receiver in the first game is decided by a coin toss.

For it to be a legal service, the ball should travel over the net without touching it to the diagonally opposite service box.

It is a racquet sport played by hitting a shuttlecock across a net using a racquet. Like tennis, badminton also has singles and doubles. Badminton is often played in a yard or beach as a casual outdoor game.

Formal badminton games are played within a rectangular indoor court. Scoring is effected by striking the shuttlecock within the opposing side’s half. 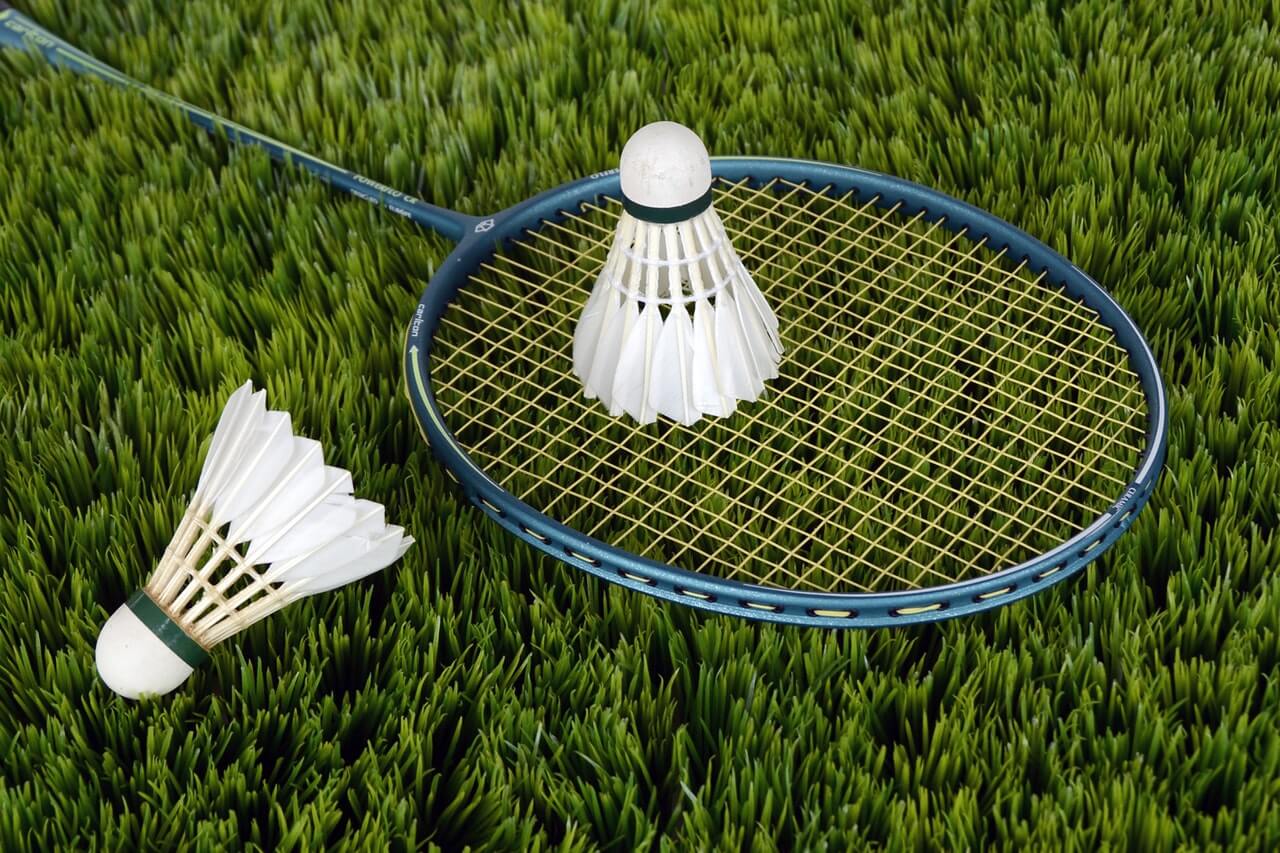 Badminton racquets are predominantly light, weight between 70 to 95 grams. They are made of carbon fiber which has excellent strength, is stiff and provides a suitable kinetic energy required.

There is a myriad of racquet designs available but with size, shape and weight limitations.

Similar to other games, the court is rectangular, divided to two halves by a net. They are usually marked to single and double plays. However, double courts are wider than single courts but of the same length.

Beginners usually find it daunting noting that double serve-length is shorter. The court should have a recommended width of 20ft for doubles and 17ft for singles. Its length should be 44ft. All the markings somehow resemble the tennis lines.

It is a high-drag, projectile conical shape ball made from sixteen overlapping feathers attached to a rounded cork base.

All corks are made within the standard requirements.

Much can be articulated on the difference between these two sports. This determines the level and how demanding they individually can be. Nonetheless, some of the key manifest differences include the following: 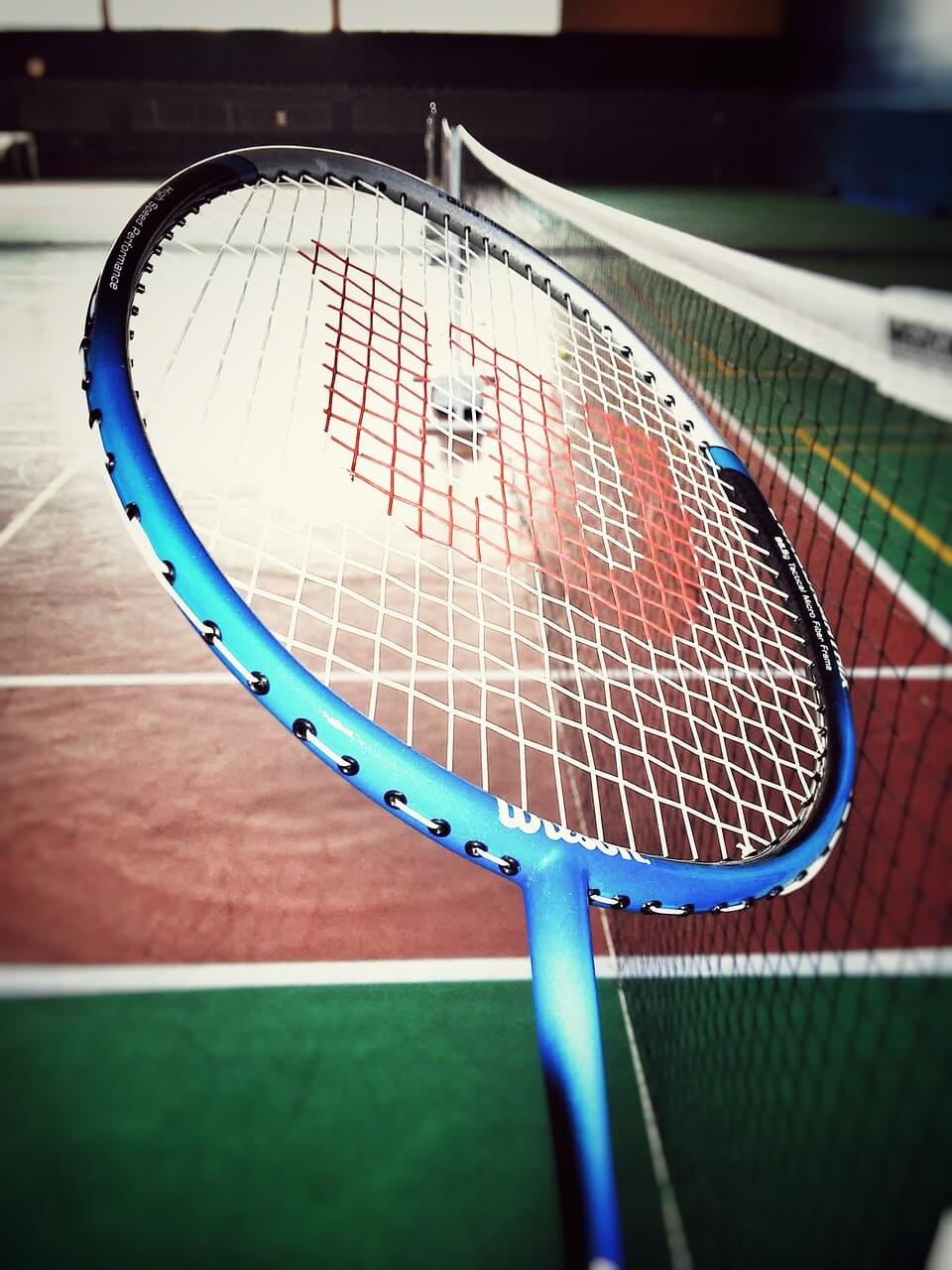 Determining exactly which is the challenging game between tennis and badminton heavily relies on individual perception. For instance, many people describe badminton as a faster game compared to tennis. This could be enthusiastic for those who like fast games.

Similarly, others can find this a challenge. Badminton overly tests stamina, overall fitness, and reflexes. Those who aren’t good in this will find it challenging whereas aficionados of this will find it exciting.