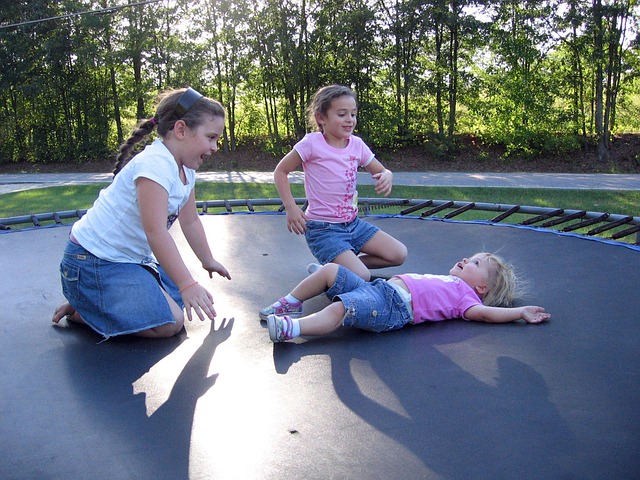 Sometimes, it can be hard to entertain your kids, and this is especially true during the summer. Kids tend to want some sort of activities or games planned for them, so it makes sense that when school is out, figuring out what they should do for most of the day is even harder! To keep your kids out of trouble and having safe fun, a trampoline is perfect. Check out the advantages of owning a trampoline below, and then go on to read about ways that you can specifically use a trampoline and trampoline games to entertain your kids.

The Benefits of Owning a Trampoline for Kids

Owning a trampoline can be a great idea when you have kids, and the main reasons are fairly simple.

First, when you own a trampoline, you’re kids will not be tempted to sit in from of the TV all day or play on their computers, phones or iPads for hours at a time. A trampoline is a huge draw to kids, and even teens like to play on them, so they’ll be entertained for hours

Next, trampolines get kids outdoors. You can certainly have a trampoline inside the house, but most people opt to put theirs on the front, side or back lawn, and this makes a perfect location for kids to go and play. It’s close by so that you can keep an eye on them, but it’s still outside, so they’re getting some fresh air.

Exercise is the third reason that I recommend trampolines to parents. Trampolines are great fun for kids to play on, but they also make great activities for getting some much-needed exercise. Many children don’t get the exercise they need on a daily basis, and trampolines are perfect for it. Children can jump, run and play till their hearts’ content.

Finally, kids who may not socialize a lot can spend more time with friends or neighborhood children when they play on their trampoline. Even families can play together on a large trampoline. There’s always a lot of fun to be had, and I love that for once, it doesn’t involve a screen of some kind.

Now that you know about the benefits of having a trampoline at home for your children, you’ll certainly be interested to know exactly how you can entertain them with some trampoline games. After all, some kids may not know how they can best use a trampoline to have fun. Once the initial fun of just jumping on the trampoline wears out, what do you do?

This is an issue that I actually had with my own children, but I realized quickly that it was an easily solved issue. There are tons of awesome games for trampoline play out there. You just have to find them.

And lastly, these are some truly enjoyable trampoline ideas. I assure you that your kids will love them!

This game is for kids who are eight years old and over. You’ll need at least six kids for the game.

This is a game that’s similar to dodgeball, but you’ll want to have several dodge balls if you’re playing with a larger group on a larger trampoline. Two of the players will go up on the trampoline, and the rest will be on the ground. For this reason, you’ll need to have the enclosure net on your trampoline taken off if you’re going to play this game.

The dodge balls that you have should be soft because you’ll be throwing them at people’s bodies, and you don’t want to hurt anyone. The people on the ground will have the balls, and you should throw them at the two people on the trampoline. You switch positions if you hit someone on the trampoline, and you earn a point for each person that you hit. You can play to 10 or 20 points depending on how many people you have for the game!

This game is for kids who are five years old and over. You’ll need at least three kids for the game, but four is recommended.

I love this game. If you manage to get four players, everyone will go up on the trampoline. The goal is to be jumping at all times while you play catch between yourselves. You cannot stop jumping, and you have to catch the ball. If you miss a ball that is thrown to you, if you drop the ball or if you stop jumping, you will get thrown out of the game, and you’ll have to get off the trampoline or sit to the side. The last jumper standing wins the game!

This game is for kids who are five years old and over. You’ll need at least two kids for the game, but more is always better.

This game is for kids who are five years old and over. You’ll need at least three kids for the game.

This is one of the best games to play on a trampoline for five and six year olds. All children but one stand in the circle on the trampoline. One child sits in the middle with their arms tightly drawn around their legs. This child is the “egg,” and all the other kids run and jump around them until the “egg cracks” or releases their arms from around their knees.

This game is for kids who are three years old and over. You’ll need at least two kids for the game, but it’s always fun to play with more people!

This game is for kids who are four years old and over. You can have as many kids playing as you want!

This is one of the trampoline games for kids that really isn’t a game with rules and winners and losers. It’s more of an activity to do when the weather gets really hot. Almost all trampolines do fine with water on them because most models are meant to be used outside. In this way, it’s perfectly fine to get your trampoline a little wet with this activity.

All you need to do is put your yard sprinkler beneath your trampoline and turn it on. Kids can run and jump through the water that will spray up through the bottom of the sprinkler.

My kids love doing this on a super hot summer day, and you can have fun turning the sprinkler onto different settings as well. One thing I do want to mention with this sprinkler activity is that the trampoline can sometimes get a little slippery when it’s wet, so always be careful and tell your children to go a little slower and jump a little lower.

This game is for kids who are five years old and over. You’ll need at least three kids for the game, but get as many as you can to play.

I like this game for five and six year olds. It’s fun to play, and it can even help kids work on improving their memories. To start the game, everyone stands in a circle on the top of the trampoline. One of the players is designated to go first and start the game.

This player does some sort of jump or move. They can choose any move that they want. The next player has to copy this move, and they also must think of a move of their own to try. The third player will then do another move, and the pattern should continue on. This game gets increasingly more difficult for the players because it can be hard to remember the specific moves!

When one of the players forgets one of the moves, they have to sit out of the game and watch the rest try. The last player to remember the longest string of moves is the overall winner of this trampoline game.

Whenever anyone asks me how I get my kids to exercise, get outside on a regular basis and socialize with me as well as with their friends and neighbors, I tell them about the trampoline that we have and the fun games to play on the trampoline that I have to come up with.

And before going further, I want to mention right off the bat that I love the particular model of trampoline we own, but absolutely any trampoline will do for keeping your kids jumping and having fun outdoors while getting some exercise. Use the trampoline guide that I’ve provided to find one that suits your needs and the needs of your children and family. Always keep in mind safety, size and price. There are many different models of cool trampolines to choose from at a number of retail outlets.

Owning a trampoline is the best idea that I’ve had yet for getting my kids to play outdoors and get exercise. They love it too, and sometimes I even have to limit the fun games to play on trampoline or they’d never get their homework done!

With that being said, I have truly found the trampoline game list above to be super helpful. Sometimes, kids can be at a loss to think of activities to play, so I always have a few of these games on reserve to teach them.

Once they get the hang of a new game, they are entertained with it for hours on end. I even like to get involved after work myself.

I hope that you have as much luck as I have with these outdoor trampoline games, and enjoy your trampoline!